This entry was posted on Thursday, October 2nd, 2014 and is filed under Blog, Bring Back My Bar | 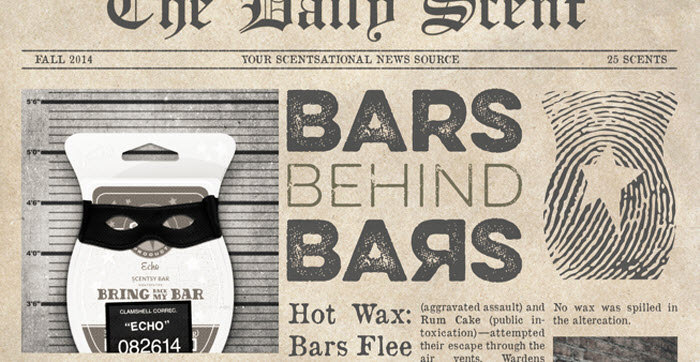 Bring Back My Bar is HERE! And your favourite inmates are rattling their chains, anxious to win their freedom.

The trial begins Oct. 1, 2014, when jurors will deliberate to determine which incarcerated fragrances should be released in January 2015. When all evidence has been presented, the top 20 jailbirds will be pardoned!

Was Root Beer Barrel wrongly accused of bootlegging? Was Puppy Love really involved in a dog-smuggling ring? Will new evidence show that Mother Earth was framed for illegal logging?

Here’s how it works:

Oct. 1 to 15: More than 400 incarcerated (retired) Scentsy fragrances will stand trial in a jury of their peers (that’s you!), narrowing the count to 30. You’re allowed to take the witness stand (vote) once every 60 seconds this year, so add http://scentsy.com/bring-back-my-bar to your bookmarks!

Oct. 20 to 31: The top 30 convicts who successfully sway the court will move on to the grand jury. Only 20 fragrances will be spared a life sentence! Your testimony is critical!

The top 20 exonerated Scentsy Fragrances will be announced and can be purchased during the month of January 2015.